He posted a new photo on his official “Instagram” account of himself from the behind-the-scenes of his new film “El Feel El Azraq 2”, which is scheduled to be premiered during Eid al-adha holidays.

Moreover، Jordanian actor Eyad Nassar will make a special appearance in the film.

Angham looked stunning in a pink dress, with a simple make-up and hair-style، which gained the admiration of her fans across the social network.

Emam took to his Instagram account to post a new photo of himself with producer Youssef El Taher and Ahmed Badawi while signing on his new film.

“I will present something great and different that will be worthy of you” he continued.

The actresses looked stunning in a casual look, with a simple make-up and hair-style، which gained the admiration of her fans across the social network.

Heidy Karam share a romantic photo with her fiancé
Egyptian actress and TV host, Heidy Karam posted a new photo of herself with her fiancé, producer Essam Abdel Aziz via her “Instagram” account، and captioned: “Once in #lebanon ❤”.

On August 22، Heidy announced her engagement to producer and artist Essam Abdel Aziz.

Their engagement pictures have stirred a state of controversy across the social media، as some users pointed out that the two parties got engaged in complete secrecy after a love story، according to Rotana news website.

Karam tried her hand in marriage once، when she was 19، which ended with divorce and resulted in the birth of her only child، a boy called Nedim، who is now 19 years old، according to hia magazine.

Once in #lebanon ❤️

Twitter users flooded the social network with messages about “El-Hadaba” Amr Diab after he made his latest public appearance with actress Dina El Sherbiny at the birthday party of CEO & Co-Founder of El Gouna Film Festival، Amr Mansi.

“El-Hadaba” Amr Diab appearance with actress Dina El Sherbiny often stirs the social media and catches the eye of the public and media.

She posted a new photo of herself via “Instagram stories” feature and captioned: “Big dislike to the bullies. If anyone is bullied on insta please do the same and share it”. 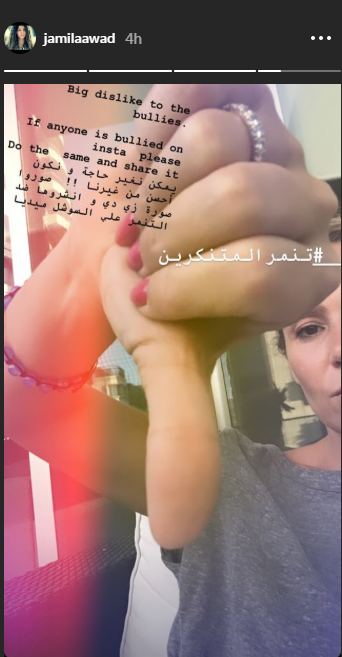 She posted a photo from the fire and captioned: “We are fine, thank god”.

Meryem looked dazzling in a yellow summer dress، with simple makeup and hairstyle، which gained the admiration of her fans across the social network. Donald Trump just liked a tweet from writer/podcaster Heben Nigatu talking about Rihanna, and some people are wondering if the “like” was a mistake or if he really stans the superstar!

Heben‘s tweet that was “liked” by Trump reads, “Every new Rihanna interview makes me grow stronger. We stan a work/life balance queen!!!.” The tweet also contains a screen grab of a quote from Rihanna talking about her work-life balance.

“I never used to be this way,” Rihanna said in the quote from Interview magazine. “It’s only the last couple years that I started to realize that you need to make time for yourself, because your mental health depends on it. If you’re not happy, you’re not going to be happy even doing things that you love doing. It’d feel like a chore. I never want work to feel like a chore. My career is my purpose, and it should never feel like anything other than a happy place. I’ve made little things a big deal, like going for a walk or going to the grocery store. I got into a new relationship, and it matters to me. It was like, ‘I need to make time for this.’ Just like I nurture my businesses, I need to nurture this as well. I’ll shut things down for two days, three days at a time. On my calendar we now have the infamous ‘P,’ which means personal days. This is a new thing.”